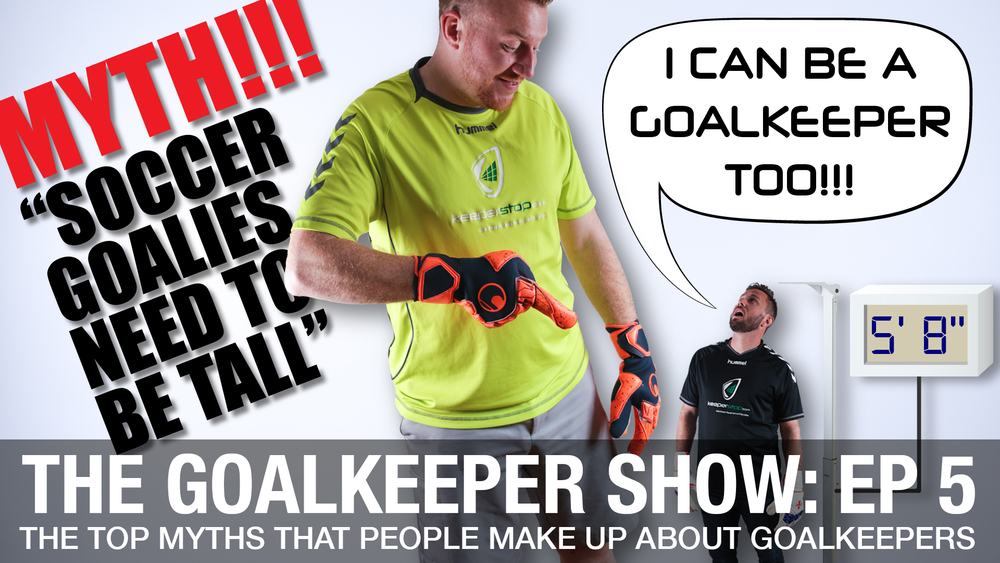 Goalkeepers need to be tall. Soccer goalies need to be crazy. GKs dont need foot skills or to be in shape. These are wrong opinions of goalkeepers
Previous Next

Goalkeeping can be a lonely unforgiving position for a few brave chosen soles being goalkeeper is a calling, a right of passage, what they enjoy.  As goalkeepers we wanted to disparage Ridiculous Myths in Goalkeeping to encourage the best and brightest to become goalkeepers.

Goalkeepers Have To Be Crazy:  Being a goalkeeper is arguably the most psychologically demanding position on the field. Goalkeeping requires immense mental strength to deal with game related pressures and individual expectations. We have to be focused from kick off to the final whistle.  Excepting that perfection is unattainable is hard but reality.  This is harsh reality of being a goalkeeper. A goalkeeper is a servant leader. We have to deal with our own mistakes and as well as 10 others.  Work with the team to solve problems. All of this can drive us mad from time to time.  With all this said a goalkeeper is the most steadfast resolute player on the field.  Consistent mentally and physically. exudes calmness and confidence

Goalkeepers are not good with their feet – This myth has been left in the dark ages of football. It used to be the case of kick and run soccer in most leagues you could watch. However, the game has changed to a more possession based tiki taka styles, perfected by the likes of Barcelona and the Ajax academy. The goalkeeper is now an integral part of keeping the ball and recycling possession. Think of yourself as a pressure valve that can help release high pressure for your team mates. Goalkeepers nowadays need to be competent receiving the ball to feet, because the style of play dictates it. Goalkeepers like Ter Stegan, Ederson, and Alisson are all known for their excellent distribution and ability to play the ball with their feet effortlessly. Ederson is particularly good at receiving the ball under a high press and passing his way out, rather than kicking long. His manager Pep Guardiola demands this of his keeper and it helps Man City play their wonderful passing style of play. As the game evolves, so should we. Being confident with the ball at your feet is an important attribute for any goalkeeper these days and can set you apart from other keepers battling for your position. First and foremost we should be good soccer players and then good goalkeepers.

Advanced Goalkeeper Training – There is no such thing as advanced goalkeeper training!  It is a myth we all use it to make goalkeeper training to sound more exciting, exclusive, and better.  Catching is catching whether you are a youth or pro.  Adding fire, a bicycle, or bunch of obsticles doesn’t make training advanced just a circus.  The fundamentals are the same throughout the life of goalkeeping.  As a goalkeeper progresses through the ranks shots are harder, distances and heights changes, speed and movement of the ball may change, and there is less time to to make a decision as well as react.  The key to goalkeeping is consistency.  The consistency starts with good habits in training.  Repetition to commit techniques and movements to cellular memory.  The ability to control the goalkeepers body and ball.  Have the same technical proficiency and focus through 90+ minutes.  Flying around is the least part of the job.

Nothing The Keeper Could Do!  - Another fine line you can hear from the sidelines or commentary box. Sometimes we need to hold our hand up and say that was a great shot. However, seeing a goalkeeper give up on the save before it’s even gone in the goal drives us mad. The least your teammates and coaches should expect from you is 100% effort to stop the ball going in the goal, even if the chances of making the save our slim. Some of the best saves ever seen have been made when the goalkeeper “couldn’t do anything about it”. The slightest finger tip tough can change the direction of the ball and lead to your greatest save Don’t fall for this myth. Always give the shot your best save effort and you might surprise yourself with a spectacular save.

Goalkeeper Dont Have To Be In Shape – The athletic requirements to be a proficient goalkeeper are unique and demanding. At the highest level goalkeepers have quick feet, smart positioning, and sharp reflexes. The goalkeeper is not the slowest, the biggest, or the worst field player anymore.  Varying levels of fitness and athleticism play important roles in controlling the goalkeeper’s body and the ball.  A goalkeeper has to have agility, balance, coordination, and control. Timing of when to jump, catch, deflect.  Speed and spatial awareness.  A goalkeeper may not have to run 5 miles a game similar to a mid fielder but doesn’t mean the goalkeepers job is any easier from an athletic standpoint.   A goalkeeper needs Anaerobic Endurance. The anaerobic endurance requirements of the keeper may be defined in two manners. The first is to develop resistance to fatigue during individual high-intensity efforts during the course of the match. For instance, when sustained pressure on the keeper occurs, such as when a keeper has made a save for a corner and must cope with the sustained pressure. The second is to ensure the keeper's ability to maintain high-intensity repeated efforts, essentially so that when called upon in the 90th minute, to make the same save as they did in the first, the keeper is not hindered by fatigue. Anaerobic endurance training for the keeper may be seen as consisting of a multi-lateral component and a goalkeeping specific component.

They Went With The Wrong Hand – This myth has a little truth to it. You hear commentators in the pro game saying the keeper “has gone with the wrong hand for the diving save”. They are referring to the upper 90 shots that require an extension dive with your top hand to cover the largest area of the goal. David De Gea is a fine example of how to make this save. Some goalkeepers do not have the power and coordination to make this type of save, so instead they push off the inside leg in a more vertical plane and use their lower hand to tip the ball wide or over the bar. Whilst the top hand save looks more spectacular as you fly through the air, if executed properly the lower hand diving save can be just as effective. Use the save that works best for your goalkeeping style. Your footwork and positioning gets you in the right position to choose the correct save.

Come OFF Your Line!   – I hated that statement.  While watching a youth game to commentators for the pros a goalkeeper and spectators will hear the goalkeeper didn’t off their line or cut down the angle.  Tactically there are times to claim a cross, reduce the angle to block a shot, or claim a through ball behind the defensive line but that isn’t the case always even though preached consistently.  Depending on the distance of the shot, free kick, or location of players it may be best to stay closer to the goal line. The physical chararcterstics of the goalkeeper will also play a part.  Real Madrid’s Thibaut Courtois can be 6 yards off his line because he is 6 foot 6. Soccer ball manufacturers are trying to design balls that move faster with more action to score more.  Striking techniques and the strength of players have increased so the ball can move more.  Statistically some of the best goalkeeper coaches in the world coaching the best youth academies and pro teams have proven staying closer to the goal line can produce more saves by allowing the goalkeeper more time to react.   Crosses are whipped in near post more even the tallest of goalkeepers will not have time to claim it at the keepers highest point without risk.  Roman Burki has been one of Borussia Dortmund’s best players and most improved.  One of the key adjustments he made was not making mistakes or putting the defense at risk by being overly aggressive.

Dont Get Scored on at the Near Post – Possibly the most well known myth for goalkeepers – “Don’t get beat at your near post”. Many goalkeepers will have heard this from team mates, coaches, parents and commentators for pro games. Why is it ok to get beat at your far post but not at your near post? This is a myth that was likely thought up by a non goalkeeper. Someone who has never played the position but see’s the near post as an easy target for the striker and one that the goalkeeper should not allow. In the broader scheme of things, we don’t want to get beat anywhere in the goal. Our angles and positioning in the goal (in relation to where the shot is being taken from) dictates how and where we save the ball. A well positioned goalkeeper will try to cover as many angles as possible before the shot is struck. If we have done our  job right, we should make it as difficult as possible for the striker to score in any of the angles – near, far or center.

Nothing The Keeper Could Do!  - Another fine line you can hear from the sidelines or commentary box. Sometimes we need to hold our hand up and say that was a great shot. However, seeing a goalkeeper give up on the save before it’s even gone in the goal drives us mad. The least your teammates and coaches should expect from you is 100% effort to stop the ball going in the goal, even if the chances of making the save our slim. Some of the best saves ever seen have been made when the goalkeeper “couldn’t do anything about it”. The slightest finger tip tough can change the direction of the ball and lead to your greatest save Don’t fall for this myth. Always give the shot your best save effort and you might surprise yourself with a spectacular save.

Australia’s -  Mathew Ryan: 6 ft 0 in
Columbia’s David Ospina -  6 ft 0 in
Chile’s- Claudio Bravo: 6 ft 0 in
Mexico’s - Guillermo Ochoa 6 ft 0 in
USA’s Nick Rimando  5 ft 10 in - Major League Soccer records for career shutouts, wins, saves, and appearances.
John Busch was a 20+ year pro in the USA and is 5’10”.
Cant leave out Mexico’s Jorge Campos at 5’7” who was a standout international goalkeeper in the 90s. Don’t give up if you are not the tallest in the world.  We all have our strengths and weaknesses.  Be the best with your feet like Campos.  Refine your decisioning making to be quick and brave to play to your strengths as a shot stopper rather than risky crossing situations like Burki.

If you love goalkeeping don’t give up.  Being a goalkeeper like a quarterback, pitcher, catcher, point guard are mentally and physically demanding.  Don’t fall prey to the myths in goalkeeper that can derail your passion or performanc.  Prove the critics wrong.  Be the most knowledgeable player on the field, the most prepared, and lead by example. 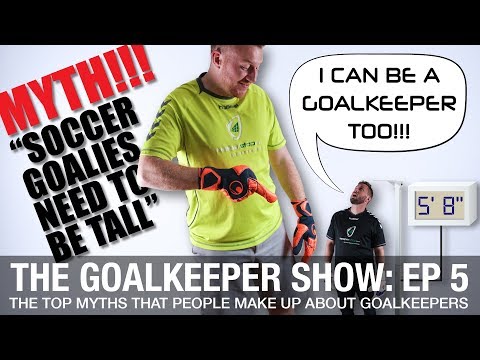 Goalkeepers need to be crazy. Soccer goalies dont need to be in shape. Keepers are bad with their feet. Secrets in advanced goalie drills.
Previous Next