A Detailed Look at the 3-Goal Situation 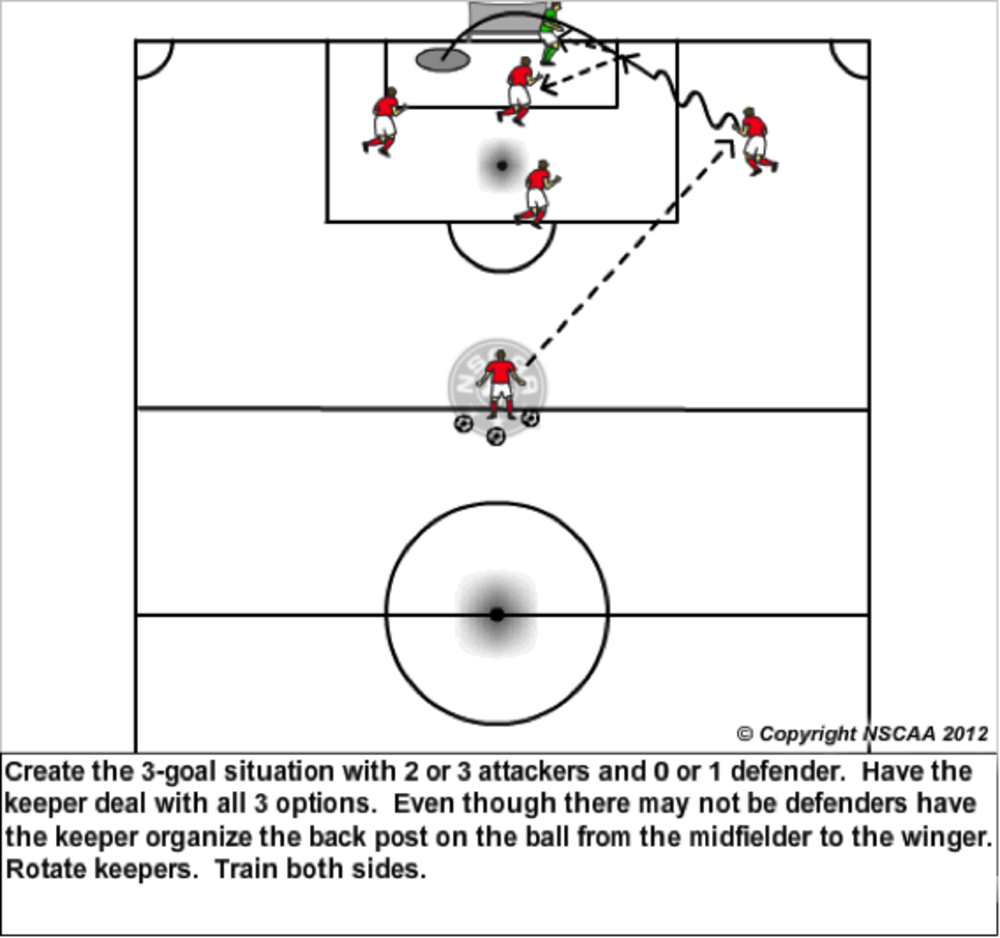 The opposing striker beats your left back on the flank, penetrates the 18 and he/she heads for the goal line with the ball. As a goalkeeper, what do you do? What are your priorities as far as positioning? What are you expected to save?

First of all, as a goalkeeper you are expected to save a high percentage of acute angle shots. This is especially true in this tactical situation. The “First Goal” or first priority a keeper must defend is the actual goal itself. Even if there are five wide-open opponents inside your 18, you must not allow the player with the ball to score at the near post. Unfortunately for the keeper, the most uneducated fan of the game knows that a near post goal is almost always the responsibility of the keeper. The starting position is one step in front of the near post and one arm's length away and the body faces the shooter. The position in front of and away from the near post provides a good angle of deflection when balls are driven to the near post and cannot be held. A goalkeeper would much prefer to deflect a ball out for a corner kick than deflect the ball into the goal.
The "Second Goal" that the keeper must defend is the space from the near post to roughly the top of the six-yard box.
Factors that determine what a goalkeeper can save in this area are:

The goalkeeper's body must be facing the shot while defending the second-goal just as it would be square to a shot that was being taken from the center of the penalty area. The issue here is saving angle. If a goalkeeper is square to a shot that is cut back, his/her ability to attack and intercept the ball is greater. On the contrary, if the goalkeeper positions his/her body at an angle and faces the shot side on, a ball angled back and through the six will be difficult to intercept.

What actually happens is that the keeper ends up diving parallel with the path of the ball and even if he/she can get a hand to it, the ability to catch is reduced and a deflection leaves a perfect central shot for the attacking team. Or, he/she does not even go for the ball at all and ends up giving the opposing team a high percentage finishing chance.
The "Third Goal" or third priority when this tactical situation arises is the space that is at the back post that is vulnerable from chipped balls or for balls cut back into the center out of the savable second goal area.

This last priority is actually the most difficult save. A goalkeeper must normally cover a great deal of ground and be set for the ensuing shot. As it turns out, most shots arising out of this situation are close range/pointblank in nature. For example, the striker gets the ball end line and serves a bending, flighted ball to the back post and about six yards out. The goalkeeper must be able to turn, cover about 6-7 yards and get set by the time the shot is taken AND react to the shot. Strategies that keepers use to deal with this situation are:

Use the fastest possible footwork to get across the goalmouth.
In most cases, this will be a sprint. As the ball nears the striker, the keeper must get his/her footwork and body under control and be in a balanced “set” position for the shot.

Get set and balanced
It is important that a keeper get set or as close to set as possible, EVEN if they do not feel that they are in the best possible position. By being set, this gives a goalkeeper many more saving options on well hit and miss hit shots alike. The ability to change directions here is paramount.  If a goalkeeper does not attempt to get set, a poorly shot ball has the ability to go in and the only chance that a save will be made is if he/she is hit with the ball directly.

How does a keeper know when and where to set? It is basically the same positioning principle as from a shot taken anywhere else. The keeper must predict where and when the striker and ball are going to meet and then get as close to the ball line as possible. If the ball is going to be shot out of the air or headed, the keeper will need to be a bit more conservative in their vertical positioning and hold closer to the goal line in order to eliminate the looping ball that will fall just under the crossbar. Balls that are played and shot from the ground can be closed down more to increase angle play as the threat from a high looping ball is reduced.

A second example of the third goal situation: The ball is cut back to a player who is central to the goal and about 12 yards out. If the pace or the angle were too much for the keeper to save in the second goal, a goalkeeper will now have to use a crossover step and then use controlled lateral (shuffling) footwork to prepare for the shot. The crossover (leg closest to near post comes across the body) step will help cover. The body should be slightly forward and the hands in a ready position to deal with the shot. At this distance, and with the goalkeeper's angle play, this is now considered a point blank shot (8 yards or closer). The goalkeeper must be able to stand up in the face of such a shot and not flinch or dive out of the way. If the keeper is in a good position and is balanced, he/she will be able to save a good percentage hit right at them and concede those shots that are well hit and find their way into the side netting.

About Soccerplus:  SoccerPlus Goalkeeper School (www.goalkeeper.com) has been on the
Cutting Edge of Goalkeeper Education for more than 25 Years. Founded by
World Cup and Olympic Champion Coach, Tony DiCicco and his staff provide
the best goalkeeper training environment anywhere. Call us toll-free at
1.800.KEEPER.1 with any questions.