Goalkeeper positioning and where to stand are important to Angles. 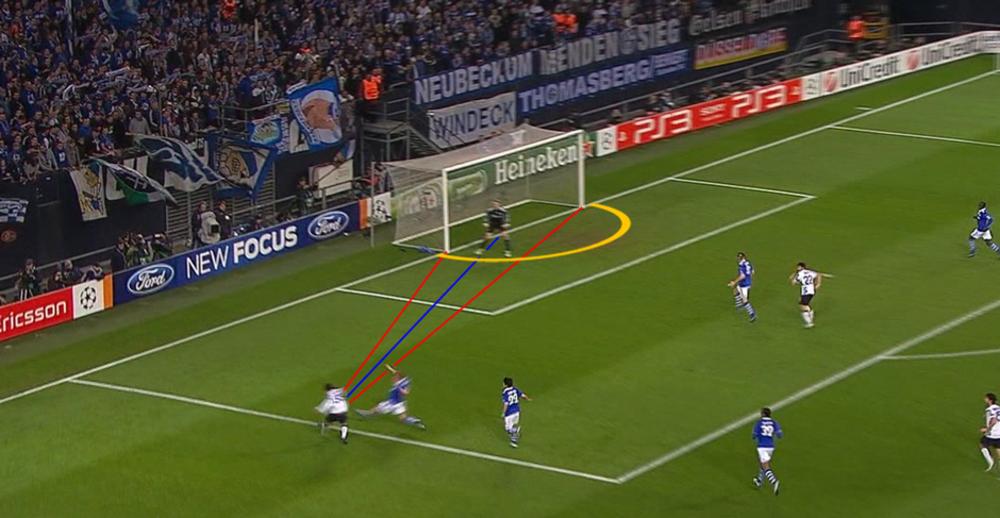 Where a soccer goalie should stand to protect the goal. Goalkeeper angle training
Previous Next

Before we address goalkeeper angles and positioning is it vital we begin with the proper body ready position.

The body and mind must be prepared to react.  The body cannot be rooted to the ground.  It needs to be in constant balance.  Dynamic stability and balance is key.  You are better off being out of position but in balance than being in position and off balance.  The feet should be shoulder width apart, with the weight on the balls of the feet.  The center of gravity is in a position of mobility.  The palms of the hands are facing your body, showing 90 degrees of flexion at the elbow joint.  The head is steady, with Shoulders Square to the ball.  The body is in motion, to overcome the effects of inertia.  This allows for a pre-stretch movement just prior to the shot.  Concentration and total preparation are essential. First you establish your starting body position than with the knowledge you get into your saving position. Goalkeepers must be good dancers.  There is fast and slow dance, big and small dance. Goalkeepers must be in the rhythm of the game to be good dancers. The ball is the goalkeeper primary partner as well as all the other factors that affect the goalkeepers position decisions.

Once the keeper has established good body position, good projection of one’s self, good dynamic stability, good balance and equal distribution of weight, it’s time to start talking about angle play.  Angle play is three-dimensional. Keeper must be concerned with their left and right sides, the near post and far post.  They also must be concerned with balls kicked above their heads. So positioning is three dimensional, left, right and above the head.  Factors that influence how far the goalkeeper should come off the goal-line include the following:  their physical dimensions, the speed that the attacker is coming toward the goal, the likely speed of the shot, the likely direction of the ball, the likely flight path of the ball, driven, rising, falling, or looping, and the condition of the field.  First priority is to protect the near post.  The ball has a shorter distance to travel and its speed will be greater. Remember, two hands to the near post, one hand to the far post.  Experience will help g goalkeeper constantly evaluate all the factors mentioned above.  Have the keeper create an imaginary line from the belly button to the ball.  This is known as the ball line. When the ball is in motion, the goalkeeper is in motion.  When the ball is stationary, the goalkeeper is stationary.  The motion of the goalkeeper should be harmonious and in synch with the movements of the ball.  The further the ball is from the goal, the further the keeper is form the goal line.  The closer the ball to the goal, the closer the keeper is to his/her line.  One of the best aids in helping the keeper visualize correct angle play is the rope.  Tie each end of the rope to each of the posts and then stretch it out to the point where the ball lies.  You move the ball and the rope and evaluate the keeper’s movements.  The goal is, of course stationary and fixed in its dimensions.  However, simply as a result of a goalkeepers accurate positioning, the goal can be made to appear to a shooter to be much smaller.  It’s magical!  When goalkeepers are in the right place at the right time, it’s not luck. It’s because they have mastered angle play.

If you were to line up soccer balls on the goal line from post to post. One row on top of the other, all the way up to the cross bar. How many balls would fit into the frame of a regulation goal?  Ready, 364 soccer balls! Why is this important? If there is no goalkeeper in goal, there are 364 shooting pathways entering the goal. Once you add the goalkeeper you reduce the number of shooting entries and if the goalkeeper’s position is perfect you can reduce even more balls from entering the goal.  The result, what the shooter perceives is based on the goalkeeper’s position. The goalkeeper can make the goal appear smaller with proper positioning and angle play.

About the Author:  Dan Gaspar is the current Iranian National Team goalkeeper coach.  Dan is also the founder of Star Goalkeeper Academy and director of Connecticut Soccer School.  He was worked with Portuguese powerhouses Porto, Benfica, as well as Portuguese National Team. Coach Gaspar has also coached with the South African National Team and was the head coach of the University of Hartford.  Dan has been a pioneer in goalkeeper education for more than 40 years.

To be the best soccer goalie you have to train with the best and be coached by the best.  Check out the SGA goalkeeper camps summer schedule.