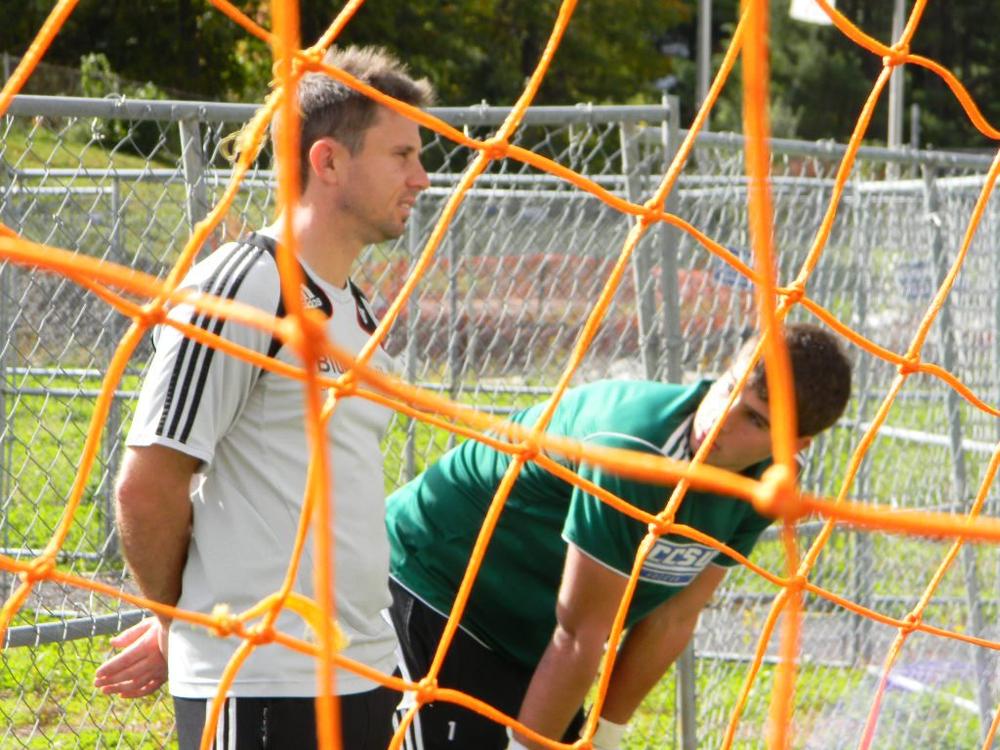 Christian from Keeperstop coaching goalkeeper from behind the net.
Previous Next

Young athletes talk, laugh, and interact with their teammates before, after practice, and while coaches are giving instructions. Goalkeepers, the anointed general and second coach, should have no problem communicating on the field right?  Then why is it that goalkeepers young and seasoned are silent as church mice on the field?

It should be easy to move teammates like chess pieces? Sure the goalkeeper sees the whole field.  They see the play develop and break down.  To move the right back over more to cover the run from the right winger or to drop a center mid into help the center backs cover three strikers. It is difficult for youth soccer goalies and their teammates to know the roles and responsibilities of their team mates and make adjustments on the fly.  The role of first defender, second defender, covering defenders and so on.  The intentions of the attacking players and anticipate how the play may develop. Professional coaches miss defensive schemes, attacking patterns, and formations and they make their living from coaching players. We are asking our youth goalkeepers to do the same.

Why doesn’t my soccer goalie talk?

The difficulty in recognizing opportunities to communicate and organize is the speed of the game. The play constantly changing with every dribble, pass, touch, and shot. By the time the goalkeeper searches for the right set of words to communicate at that time the play has changed and evolved. It is truly as difficult as learning a second language.

Confidence:
Youth players are at the beginning of their education. That lack of knowledge translates into a lack of confidence.  Confidence in making decisions for themselves as well as knowing the right thing to say to players around them. For a developing goalkeeper to talk, communicate, and organize they are telling another player what to do.  YIKES. Forget about the tactical implications what about social !  Youth athletes in general take everything personally. Boys and girls alike have a social hierarchy on the field. Cool or dominate players that can do no wrong.  Many times a goalkeeper will communicate but it is ignored or rebuked.

How do we coach the goalkeeper to communicate?

Simple to More Complex:
Start simple and build.  The “ Keeper “ call or “Away” are good places to start.  Encourage the goalkeeper to call keeper loud and proud when the want the ball or when they don’t. When goalkeepers have an understanding of the importance of  Keeper or Away and a general knowledge of when to use it move onto more complex communications such as asking for the ball to be played back to the keepers feet. Communicating observations with defenders. “ Paul a player is behind you”.  Or speaking to a center back (another leadership positions) “ Becca ! 15 is open”.  Communicating observations is easier than organizing. As the goalkeeper develops an understanding of soccer they can start communicating directions on a one to one basis. An example would be organizing “ Caitlyn mark 11 “ , or “ Nick step up” “Tony force him inside".  Basic examples but you get the point.

Action and accountability or who do you want to do what.   After one to one communication goalkeepers can communicate such things as pressure, cover, and balancing defenders.  This is where they generals in training. They start to recognize weaknesses such as unmarked players or stretched defenders and pull them in closer to sure up the defense.

Expectations:
As the goalkeeper and coach work together to understand the formations and roles and responsibilities the goalkeeper can communicate and organize. It is important for coaches to work with the goalkeeper to organize on defending corners, setting up walls, and starting the counter attack for example.  These are tactical issues that would be important and appropriate to reinforce 14 years old and above depending on the level of play. Don’t just tell the goalkeeper what is going to happen, engage them.  Maybe they learned something at a keeperstop.com or another camp that you may not know or something that is confusing to them.

The art of goalkeeper communication is honed over years of practice, through game experience, support, and continued education.  How hard do we have to work at effective communication in our work or everyday lives as adults?  Now look at communication through a young athletes eyes with all the moving parts of the game, team personalities, and new game situations. Goalkeepers learn to talk and communicate just as they learn to catch and dive.

I wrote this article after having a conversation with an accomplished Division 1 coach regarding a teenage goalkeeper. Their feedback on the goalkeeper was he didnt talk but was a very good shot stopper and athlete. The above article was basically our conversation.

Contact keeperstop.com with any goalkeeper equipment and sizing as well as with goalkeeper drills.