Hello, Log In
My Profile Wish List Logout
0 Cart
Your cart is empty.
Keeperstop.com > Goalkeeper Drills > Goalkeeper Psychology > What It Takes To Be A Professional Goalkeeper

How To Become A Professional Goalkeeper

Coach Gaspar has been a part of 4 World Cup qualification campaign with South Africa, Portugal and 2 with the Iranian National team. He was the assistant coach with Benfica, Porto, and Sporting. Dan is a featured clinician with United Soccer Coaches ( NSCAA) and has been a staff coach for the US youth national teams during tournaments and camps. Dan is the founder of Star Goalkeeper Academy as well.  There are not many in the world with more passion and experience in professional goalkeeper coaching.  This article is an abract of the video of interview conducted with Dan.  Enjoy!

Who are a few of the best goalkeepers that coach Gaspar has worked with and why.  What made them professionals?
Coach Dan has worked with some of the best goalkeepers in the world on 4 continents. He has worked with Tim Howard in his early years. Portuguese legends such as Eduardo, Ricardo, and Vitor Baia. The best goalkeeper in Asia Alireza Beiranvand. He has trained Brad Freidel and Kevin Hartman and the list goes on.
Coach Gaspar's Thoughts: They are all so different. I wish I could take an ingredient from one and another and put it together to establish the perfect profile for an outstanding goalkeeper.  The uniqueness of each one of them makes them very special.
Eduardo was one of the most passionate goalkeepers he has ever trained. Nicknamed by Dan the terminator because of his passion and work ethic.
Ricardo because of his field player skills.  In the Euros Ricardo saves a PK and than scores one beat England.
Iran’s Alireza Beiranvand is a great combination of being athletic and tall at 6’4”+.  A big goalkeeper that plays like a mid sized goalkeeper. Beiranvand is one of a few that can say he saves a PK from Cristiano Ronaldo.
Brad Freidel is a combination of size and presence. A fierce competitor.

What has made Tim Howard outstanding professional goalkeepers?
Coach Gaspar's Thoughts: Tim is much more than a goalkeeper. He had to learn to manage OCD and Tourette syndrome as a youth to play for the biggest clubs on the biggest stage of the world for a long time. Tim was an outstanding athlete. Very similar to Tony Meola, Tim could have gone on to be a pro in other sports. Tim Howard is a man of faith.  He has faith as a Christian that helps guide ground him and a belief in himself to motivate.

Philosophies that coach Gaspar instills on youth goalkeepers at SGA to be the best:
Coach Gaspar's Thoughts: Dan’s passion is the same for the youth goalkeeper putting on goalkeeper gloves for the first time to the world class professional. The standards of excellence for a youth and professionalism are the same as well. It is important to establish the consistency, composure, the technical foundation and decision making most importantly while maintaining their personality.
98% vs the 2%: 98% look that part and show up physically but to be the best goalkeepers need to show up with their brain. Dan and SGA teach goalkeepers to utilize the strength of the brain. To be a spunge to learn. Bring their heart and soul to every training session.  The World Cup mentality every day.

Physical Characteristics:  Is it the size of the goalkeeper or more?
Coach Gaspar's Thoughts: Every coach wants goalkeepers that are big tall and strong. Today’s modern game has modified the ideal profile of the typical professional.  The ideal profile is the goalkeeper with the size, strength, presence of a big goalkeeper with the speed and agility of smaller GK. Goalkeepers like Beto, Jon Busch, Nick Rimando didn’t have the ideal profiles due to their size but had incredible careers. They had to do everything better than everyone else.  They had work ethic, passion, intensity, and attention to detail.  Their suffering and sacrifice for all of us under 6 foot. Success comes in all sizes and shapes. Don’t give up hope.  Success is doing the best you can with the tools you have and excepting the results.  That journey of trying to be the best goalkeeper will help a in all aspects of life.

Psychological components that youth goalkeeper must develop for the professional path.
Coach Gaspar's Thoughts: Psychological components least addressed and most overlooked.  Understand the level of detail. Understand the commitment sacrifice suffering that needs to take place develop and achieve their goals.  The importance of balance. The switch and the ability to turn the switch on and off when needed. To turn on the professional training mindset when crossing the line onto the field. To be a fierce competitor and good teammate. The commitment to train in rain snow and to rise earlier than everyone else.
Kevin Hartman – Passion, work ethic, determination, and communication.
Brad Friedel - Combination of size and presence. A fierce competitor. Performing under pressure over overseas.
Victor Baia - was born to be a star, a celebrity but had composure.  Had class. His reaction to a mistake or a great save was always very stable. As a result his fans and teammates had a lot of confidence in him.

Psychological initiatives with young professional goalkeepers to believe in their ability.
Coach Gaspar's Thoughts: Story about José Moreira – Benfica goalkeeper that made his debut at 19 years old.  A lot of pressure on a young goalkeeper playing for one of the top clubs in the world. For the Portuguese Olympic team his teammates and coach believed in him.  It took Benfica coach José Antonio Camacho a little more time. Camacho doubted Moreira. Coach Gaspar needed to develop a special partnership with Moreira to encourage and support him through the good times and bad.  They made a commitment to each other that they would wear each other skin.  That they both would work every moment of every day to convince the coach and players that he was up to the level of Benfica.  Coach Gaspar gave Moreira the nickname Gladiator.  The conviction that the gladiator needs to have to make a life or death final decision.  Moreira needed a coach to believe in him.  To help him believe in himself again.  He was eager to learn and earn the respect of the coach and players.

Risks of Specialization: How important is it to be a well rounded goalkeeper and person on and off the field?
Coach Gaspar's Thoughts: Coach Gaspar feel that coaches must be careful. Specialization at a certain makes sense.  Maybe 13? He believes in the wholistic approach. Developing a cultured goalkeeper meaning that are good students, have awareness of the world game, play other sports. We have to be careful of the burn out.  The most successful professional goalkeepers that he has trained had well balanced life, family values, positive relationships, hunger and commitment but enjoy life.

Part of Coach Gaspar’s philosophy that will help goalkeepers to become professionals:
Coach Gaspar's Thoughts:
Hard Core Goalkeeping – Start within and work away from the body. Take care of the ball. The occasional exceptional save is great but coaches prefer their goalkeeper to be simple safe secure.
Respect the ball.  The ball is extension of their personality.  Inside the ball is their hopes, dreams, and aspiration.
Love what you do.!

Contact Coach Gaspar at www.stargoalkeeper.com regarding goalie training or summer goalkeeper camps.  keeperstop.com loves hearing from the goalkeeper community.  Share with us your best saves, moments, as well as learning opportunities.  Email or call keeperstop.com with any goalkeeper glove, equipment, or training questions. 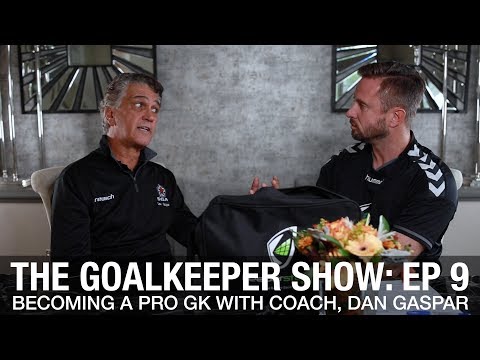